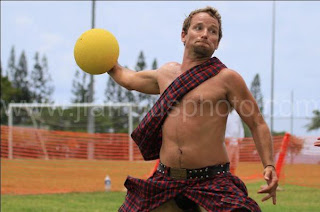 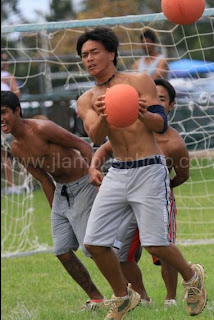 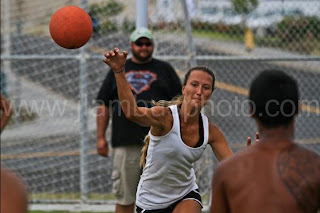 Dodge ball has been a childhood favorite of mine, as it was for most. So when Kailua-Kona, Hawaii had a chance to go toe to toe with neighbors, co-workers, and friends in a Dodgball championship to the death, we the "Kids" of town jumped at the chance. Then proceeded to dive at the chance, duck from it, and of course dodge it. Our mission was to set up a 10 team tourney and go head to ball until we had a single victorious team. The cause was to raise money for a village in Africa so they could purchase much needed mosquito nets for their homes.  On the faithful day teams amassed to the Old Airport Recreation Center. The uniforms were riotous to say the least. From the kilt-wearing "Balls in yer face", the compression saock-wearing "Ballz Deep", to the "Rainbow Sprites", the beer toting, rainbow-wearing, bartendresses from around town. All were out in force, and in style. Though I was a member of one of the teams, I also took on the role of "sport photographer" for the matches I wasn't playing in.  I shot my Canon 7D with the 100-400mm L series lens attached. The 7D performed flawlessly, firing off shots as fast as I could take them. In a high speed game like dodgeball you have to have a high speed camera to catch the action. And catch the action I did indeed. In the end we made over $2000 dollars for charity. And the young punks of the games took home the championship. It probably helped that they were 10 years younger than most of us, and made up the better part of the Kealakehe high school baseball team. All in all a successful, and fun day with tons of pictures to remember it by.
Posted by JLambus at 3:53 PM