Every now and again there comes an idea so bad you just have to do it. This is the story of that idea. 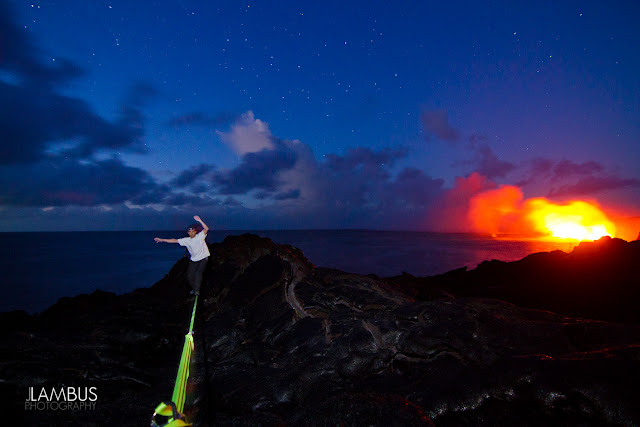 A while ago a group of slacklining acquaintances and I were talking about the best mental motivations to stay on the line without falling. Different ideas were brought up including pretending the ground was lava.

Remember, that game when you were little? You and your friends would run around and pretend something was lava and that if you touched it you would burn up and die?  Jump on the slackline and pretend the ground was lava. That would keep you on the line.

Then someone said, "Well ya know... there is a volcano on this island, we could actually set up a line over real lava."

Nevertheless I couldn't shake the idea. After a brief conversation with my two fellow slackrades on island, the decision was made. We would visit Pele (the Hawaiian goddess of fire), and give offerings of gin, blood, and nylon. And that we did.

If you've never been to the Kilauea volcano on the Big Island of Hawaii, let me explain it's gnarliness.  From Kona, where I live, it is a three hour drive one way. Of which the last 45 minutes is a one lane road in total darkness, through some pretty scary, middle of nowhere, "the hills have eyes" kind of backwoods, not-a-town. That road eventually dead ends into lava rock that flowed over the road years ago. The road literally just disappears under a huge slab of black rock. Creepy. Now it's time to walk. Creepier. But it's only just begun. This area is known for it's unforgiving nature. Rivers of lava breakout regularly, without ever giving warning. Sulfur vents open and close releasing noxious gases making it impossible to breathe.  Little shards of obsidian glass float around in the air and land on your skin, making you itch, but will cut you if you scratch or rub at their presence. The air stings your nostrils and scrapes at your eyes.The ground is uneven, and unstable. Every step your feet wobble and slide as newly formed rock breaks and crushes beneath them. After a 2 hour hike over this most unforgiving terrain, you reach the main ocean entry. This is where fire meets water, and can be particularly spectacular. Explosions happen as large as 400ft high, when hot magma cools rapidly where it collides with the turbulent waters of the pacific. Another concern here is that newly formed rock called a bench, often acres in width, can give way and slide into the ocean without notice. These bench collapses have taken several lives over the years. Not your average place to rig up a park line.

After trekking out with our slack gear in the dark, we set out our offerings to Pele. Including pouring the gin into a crack of flowing lava. Flames shoot out of the crack as she thirstily consumes her gifts. We then began to search for anchors.The "rock" in this area is more like piles of glass lightly fused together, than the rock most people are used to. Needless to say, suitable anchors were hard to find. We searched for nearly an hour and things began to look grim. Most seemingly stable anchors, could be pushed over with just your body weight. Finally I ventured out onto the bench, closer to the active flows. (do not ever do that) Lo and behold two seemingly solid pieces of lava positioned in a perfect valley about 30ft from a small break out, and about 200 yards from the massive lava river entering the ocean.

After quick deliberation we set about rigging with a primitive. The rig went quick, and we were walking our first (and likely only) Lavaline ever. We took turns on the line until the sun rose and it began to rain.

Now I am not usually one to get emotional about things like "the beauty of nature", but this truly overwhelmed me. Standing on the line, just as day began to break, with the stars still above our heads, the cool rain falling on our faces, and being warmed by the lava flowing so nearby, was utterly mesmerizing. I'm not ashamed to say, I shed a tear.

After we had our fill of slacklining and gin, we derigged in the daylight, packed up and walked back to the car. I don't know if we'll ever walk another line like that. It's likely that the bench will collapse one day soon and retire those chunks of rock that held so well to the ocean. Thank you Madame Pele. 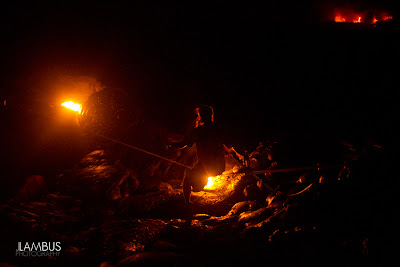 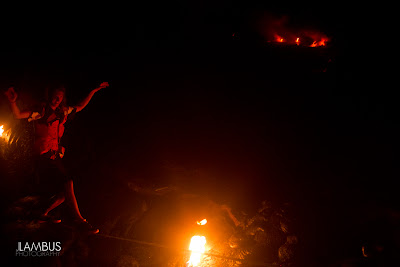 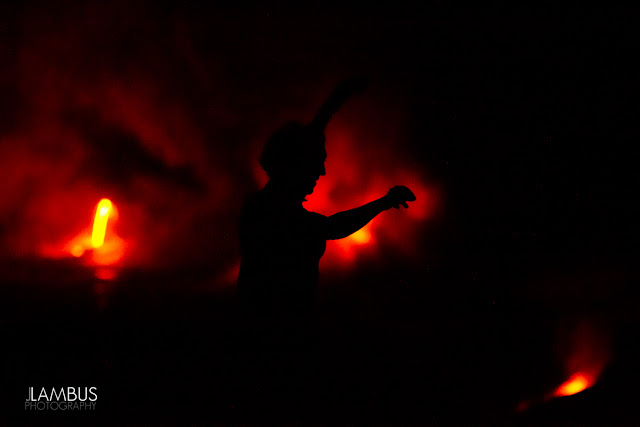 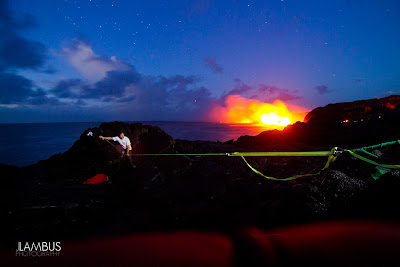 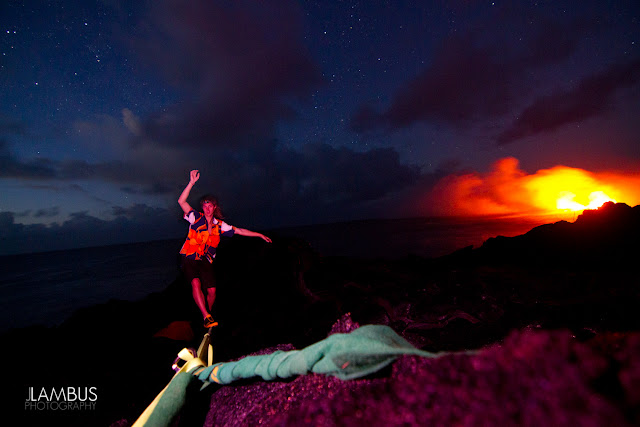 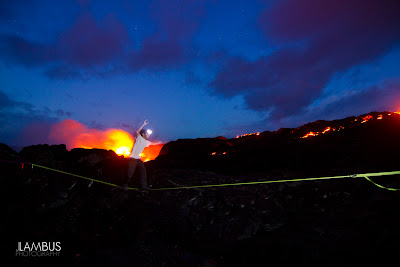 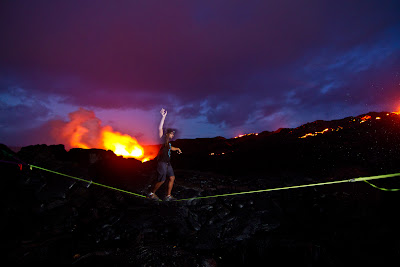 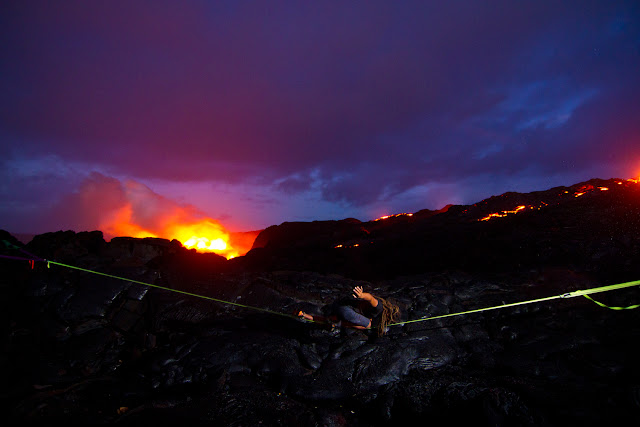 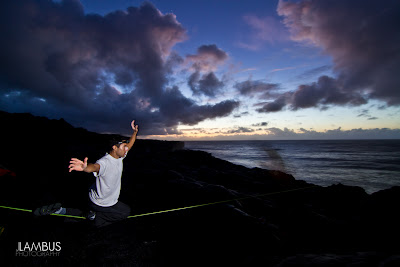 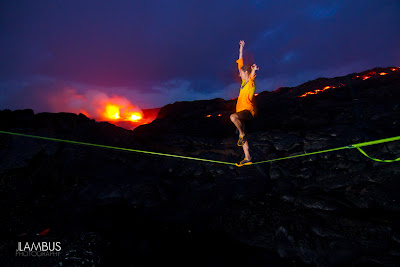 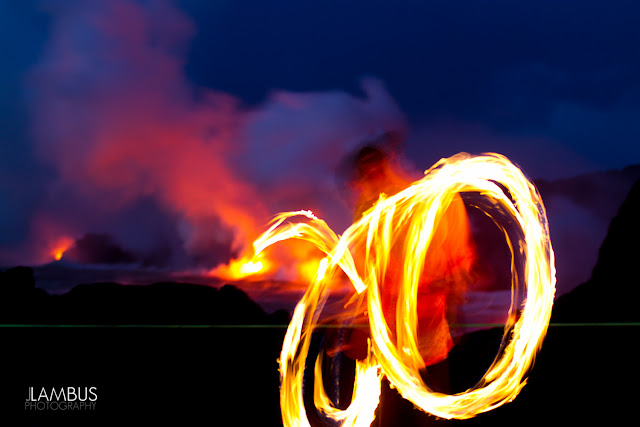