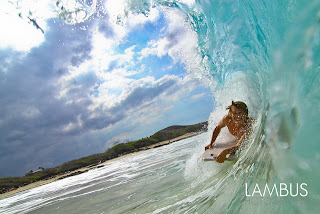 PSA: I saw a triathlete break his arm in the waves yesterday. It could have been prevented. I know a few of my main land friends read my blog, so I'm using this once again to attempt to warn people of this happening to them.

Yesterday I went bodysurfing at magic sands. The waves were big. Nowhere close to the biggest I’ve seen there, but they were big. The lifeguards repeatedly came over the megaphone to tell particular people to vacate the water, in a nice way like "you with the blue shorts, today's not your day" (which few listened to).

I bodysurfed for about an hour and during that time there was a foreign triathlete in the break that would stand right in the impact zone of the breaking waves. Numerous times I had to dodge him as I surfed past, having to either pull out or go wide and getting closed out on.

After a particularly sandy rinse cycle, I finally told him that he needed to go back to the beach or get further out behind the waves, and that he would get hurt standing where he was. He either did not speak English, or choose to ignore what I said. (I’m guessing ignore, because my hand signals were pretty expressive i think)

About 5 minutes later the biggest monster set came rolling through. Everyone (in the know) swam out. No local even attempted to ride a close out set like that. After the set passed the lifeguard began yelling over the megaphone (not nicely anymore) for everyone to look at his partner pulling out the tourist with the broken arm. And "see what happens when you don't listen".

Lo and behold it was my triathlete I had just warned. I feel really bad for him. To come all the way here and 3 days before your race be injured in a life changing way. I really hope he makes a full recovery and we can see him racing again next year.

But still I feel a small amount of anger, as he was told by me, and the LIFEGUARDS. Ignorance is just that, and one can't be mad at anybody for ignorance, but when you are told by multiple people in the know, it is no longer ignorance. It is reckless foolishness. This guy is an IRONMAN, he is a strong swimmer and an athlete by nature. This is a testament that the ocean can decimate even the strongest most capable individuals.

I posted a similar story to this about a year ago which I will link to at the bottom of this post. And after posting it on Tripadvisor.com , I had many people commend my warning (locals/surfers) and a few people (tourists) who told me I was being pompous and that I didn't have to right to tell people what not to do in the ocean, because it's not my ocean. This is true I can't tell anyone what to do, but I can offer my advice.

I sit out lots of days that are too big for me. Everyone has their limit. It's all about knowing yours. I don't claim to be the best waterman, or the most experienced, but in my 8 years living here, I have seen numerous serious injuries at this beach and 2 deaths. They are needless. And if my being pompous saves one persons life, or saves one ruined vaction, then I'm glad to have done it.

If you don't agree with what's being said here, then it's a good chance this post is for you. I'm sorry for the reality check, but you are putting your life in danger. And the life of others. Contrary to popular belief lifeguards have been injured or killed in the line of duty. Even as capable and experienced as they are, the ocean is a strong beast, that no one on the planet can beat 100% of the time. So next time you head out, remember that you not only risk your own life, but that of the person that may try to rescue you. I wouldn't want that on my conscious.

So now you know the story as to why I'm a little worked up about this right now. This is not the last time this is going to happen. The season is just getting kicked off. The waves will only be getting bigger as we get closer to winter. Please don't let this be you. Relax, get a tan, watch surfers who know what they are doing do what they do. It's as much fun sometimes, and more so if you end up like this poor Ironman. Here is a list of some easy tips for making your days on the beach and in the water safer and more enjoyable.

1. Read the signs that are posted, they are there for a reason.

2. Never turn your back on the water. The ocean is considerably stronger than the strongest most experienced humans in the world.

3. Watch the water for 15-30 minutes before entering to get a feel for what's going on that day.

4. Ask someone in the know about the area (hidden rocks, riptides,current, alternate route out of the water if necessary)

5. Large waves are scary but running away from them once in the way is nearly impossible. You must head toward them and duck under them as close to the bottom as possible.

6. Waves and current are not the only things that can be dangerous at certain beaches. Find out as much as possible about an area before entering the water.

7. Paying an experienced guide is not a bad idea if you are completely new to ocean swimming, snorkeling, or surfing/bodyboarding.