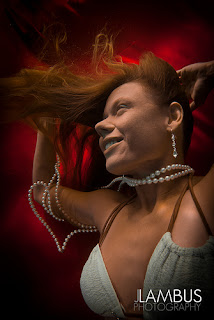 So after swearing off modeling photography some time ago, I’m back at it again. But with a new twist this time around. Underwater. Now, this poses a few unique challenges. First is location. The ocean can often be treacherous, and make it difficult or nearly impossible to enter and exit the water safely. A pool however may not be big enough, or the chlorine poses too caustic to your models eyes. The model of course is a huge issue as well. Above water, a lot of models can look good, but underwater this task can be a bit much for some folks to handle. Keeping their eyes open under water without looking squinty or too wide. Letting the mouth and nose fill with water as to avoid unsightly bubbles whilst smiling and looking up. Keeping themselves underwater , but maintaining their grace and pose. And of course holding their breath up to a minute at a time while doing all of this and remaining looking calm and relaxed. Many of my usual models would have a hard time with this. And many of the people I know who could do this aren't exactly model-type if you know what I mean. This past weekend I met with a local surf goddess, Donica. She got married some time ago and has decided to do some underwater photos in her wedding dress. After her first few photographer options fell through a mutual friend recommended me to her. And thus became our underwater photo shoot. I had seen other underwater dress shoots and I immediately decided I wanted something completely different. I finally decided upon shooting against a backdrop. I went to the fabric store in search of the perfect background. I settled on some very shiny satin, hoping the shine would remain once we entered the water. The next task was to figure out how I would hold the fabric agape. I made a large PVC rectangle and fitted the large piece of fabric over it. Seemed like it would work and be easy, alas there were some things I hadn't thought of. I met Donica and her husband Abraham at Kealekua bay one day when the dolphins weren't there to bother us and we began shooting. We had her go with a bikini instead of the full dress to start just to test it. The bikini was actually made by her, out of the left over materials from her wedding dress, so it was the perfect test outfit for exposures of the dress. Once we got into the water we realized our follies. Fabric sinks. Not fast, but it sinks. We had thought ahead and brought an Imagine Surf paddle board with us for flotation as a resting platform as well as something we could hang the pvc frame from. I also had my girlfriend accompany us to help in carrying props and fabric. If we had had even one less person this shoot would have been a disaster. As we opened up my backdrop and fitted the pvc together we realized the nature of our contraption. In the water the thing essentially became a drouge chute and drug our photo shoot all over the place. Every ten minutes or so we would have to stop shooting pull it out of the water, swim 100 yards and redeploy it. After about an hour of shooting we were becoming winded. More the model than me of course …. wink, wink. All and all I'd say it went well and we came back with some promising shots. Still a long ways to go but it's a start. More to come. 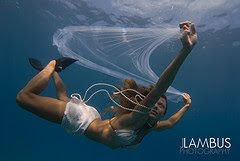 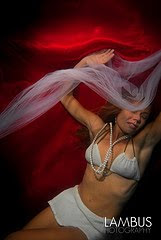 Posted by JLambus at 1:44 AM No comments: